A few days ago, August 15th marked the anniversary of South Korea’s independence: more commonly named ‘National Liberation Day of Korea’. For many Korean citizens, they were able to take a rare day off from work and daily responsibilities to be patriotic, reflective of the fast development of their country despite the difficult circumstances their ancestors/elderly citizens had faced before Korea’s independence at the end of World War II; not to mention the Korean war that soon followed in the 1950s.

Holidays in whichever nation typically bring the excuse to eat well; whether it be socially or as individual indulgence. So this day called for eating something new and delicious. After riffling through the fridge and kitchen cupboards, my partner took to YouTube to find a suitable recipe that correlated well with the ingredients at hand. Teriyaki pork over steamed rice seemed delectable.

The video recipe has both Korean & English subtitles, so here I’ve included the link to the video if you wish to recreate this dish too. Of course I take no credit for this recipe, I just want to review it. 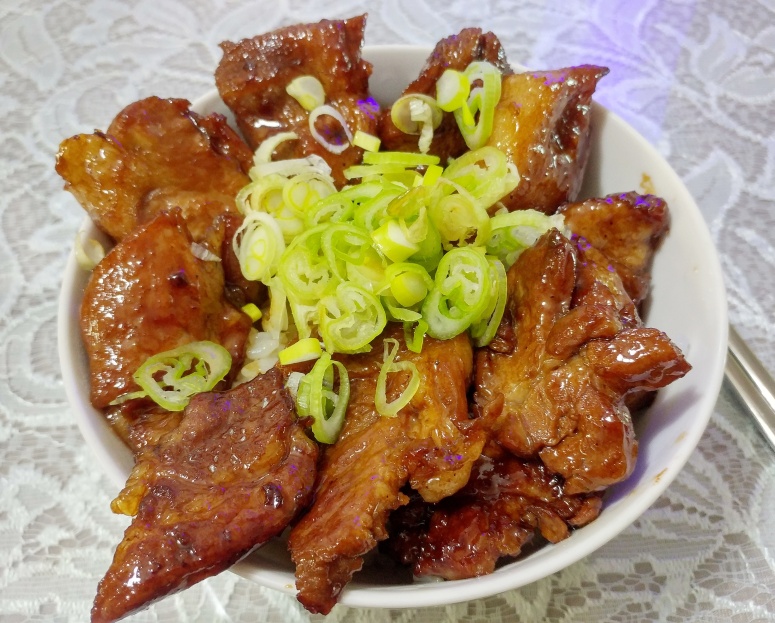 The pork marinate is fairly straightforward and typical of most Teriyaki style sauces or East-Asian cuisine in general; making use of soy sauce, mirin and rice wine. This particular recipe missed the step of briefly boiling the pork with lemon juice before frying it: lemon’s function mainly being to irradiate the unsavoury ‘porky’ scent that can linger even once the pork is fully cooked. We didn’t have any lemons, but kiwi works almost just as well. Besides, later on in the recipe garlic is used for the same reason but this step alone isn’t always enough to improve pork’s taste. The honey is definitely a good addition to the marinate as it balances out the saltiness of the soy sauce and strength of the alcohol with it’s sweet sugar. 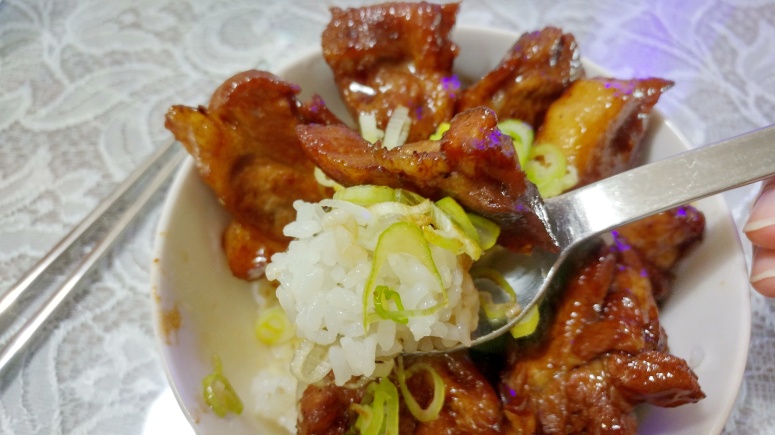 If you don’t have any honey (if I remember correctly we didn’t have this either) a little golden syrup or brown sugar are not bad alternatives. The good thing about this recipe is that pork belly or pork chops can be used depending one your preference, either way the cooking method remains the same and you don’t need to change anything. Just be mindful that pork shrinks considerably in size one cooked, so you need to remember this factor when you buy your meat according to the desired portion size.

Final verdict – the overall flavour of this dish was satisfactory and piquant, with it’s ‘kick’ of tanginess among the sweetness without being too salty. The ‘porky’ scent and taste I mentioned earlier was still slightly pungent for my liking, but that could just be due to my fussiness regarding red meat and might not be bothersome to others. The spring onion garnish provides texture and accompanies well. The only thing I would do differently if I prepared this again, would be cutting the pork into smaller pieces so that they can be scooped more easily onto a spoon with a mouthful of the rice. Seeded or purple rice could be used in place of plain steamed white rice without a problem.