Their menu may not be extensive yet it certainly encourages diners to come back for more. You see, their wing menu is devised into a tiers according to spicy level. At the high end of the scale you can find wings (boneless or on the bone) coated in a sauce based with Habanero chilli peppers, however their are zesty and buttery options well suited to taste buds which aren’t necessarily comfortable with spicy food.

The first time I experienced Wingstop wasn’t too long ago; it was during the British Government’s “eat out to help out” scheme – which was issued shortly after the lifting of lockdown restrictions in the hope to revive the British economy. As most people do when they visit a Wingstop, we pieced together our own meal by selecting some boneless chicken wings and fries as a side. A like many other chicken joints, they offer various sized portions of chicken by the number of pieces – you can select either 6, 8 or 12 pieces. If you opt for 12 pieces you can go half-and-half by selecting two sauces (6 pieces in one sauce and the remaining 6 in the other sauce, simple). Wingstop UK use only Halal chicken. 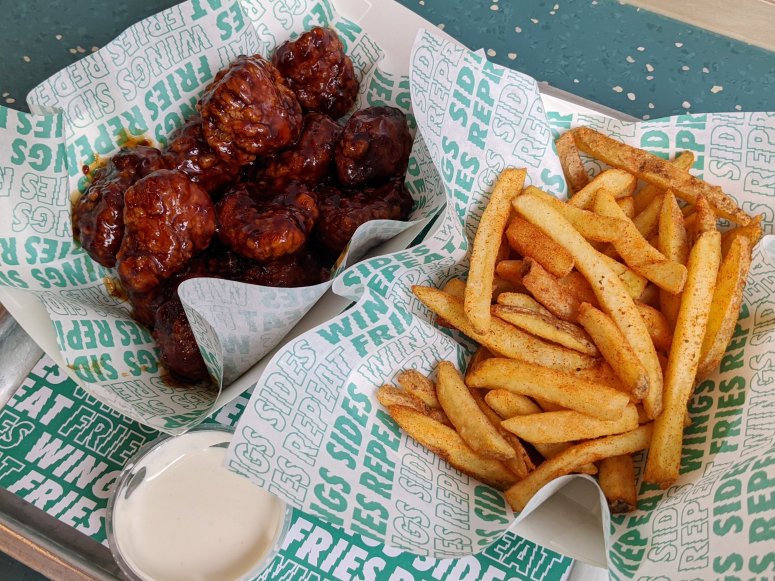 Upon first visit, we decided to try 12 Boneless wings made with their signature Spicy Korean Q sauce – a harmonious balance of sweet and spicy. The reason for our choice being that I hope it would resemble something similar to 양념치킨/Yangnyeom chicken – a sticky, sweet, savoury and spicy fried chicken dish made with key ingredients: 고추장/ Gochujang (Korean red chilli paste) and Honey. We also chose Cajun seasoned fries as these seemed to pair best with our choice of chicken.

Long answer short, it was so delicious that we decided whilst still eating that we’d return sometime in the near future – which we did and I will tell you about shortly. The Spicy Korean Q boneless wings weren’t as spicy or as similar to Yangnyeom chicken as much as we had hoped, although it was still very moreish with it’s spicy sort of barbecue taste.

I believe any of the dipping 3 sauces at Wingstop would complement Spicy KQ – ranch, honey mustard or blue cheese – with the blue cheese providing a cheesy and creamy flavour which in turn cooled down the some of the spice from the wings. Ranch would also neutralise any option of spicy wings and honey mustard would pair well with wing sauces which are milder or sweeter and perhaps already contain honey or sugar.

The fries were pretty good too. They had their peel left one and were sprinkled with just the right amount of powdered seasoning. They weren’t dry, greasy, too mushy nor overcooked. I actually thought the cajun fries were spicier than the wings.

I’m aware blue cheese isn’t for everyone, but I liked it. It somehow matches well with the chicken and fries. The only thing I’d suggest is that Wingstop provide more dip options. You can ask for tomato ketchup and mayonnaise sachets if need be.

On the second visit there was no doubt about having to try a different flavour of boneless wings. This time round we went for 12 pieces again, but had half-and-half Spicy KQ (simply because I had to give into my cravings for it after the first time) and Brazilian Citrus Pepper – zesty citrus and piri piri. Just like last time we shared one portion of fries and the 12 wings between two. Although this portion size is perfectly normal for one person, we just shared because we knew we would be snacking a lot whilst out on a rare trip to Central London. 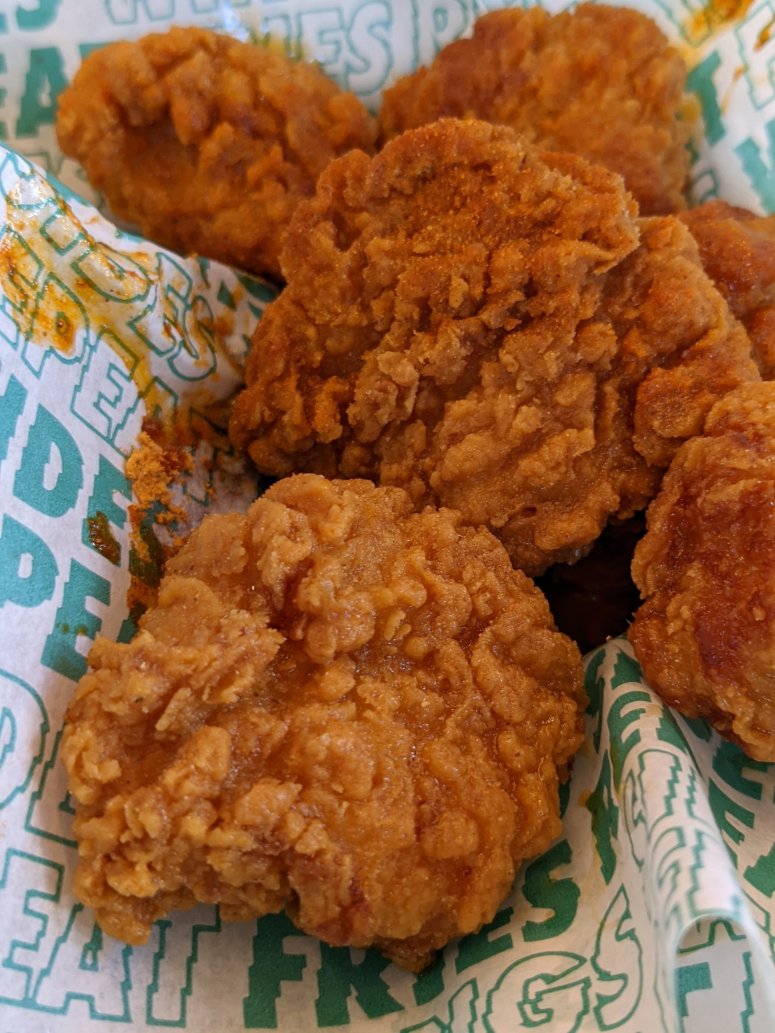 These were juicy but more crispy than the Spicy KQ boneless wings. I really liked the texture as they were less messy to eat than the other type. They were zesty a bit like lemon pepper chicken, just with more of a kick from the piri piri. They weren’t overly oily, although some residue did sit at the bottom of the wrapper/container they were placed in.

Brazilian Citrus Pepper is a good choice for those who like a medium amount of spice. We went with the Blue cheese dip again just because the dip options are limited and I thought the other dips would be too overpowering to taste the fries and chicken properly. The blue cheese dip isn’t actually as potent as you may think.

Naturally we chose Lemon Pepper fries as they and the wings both fall into the same flavour palate/pairing – a bit sour, a tad salty and slightly spicy. They were better than plain fries and we finished them without complaints, but I would say I prefer the cajun fries over the lemon pepper fries. The flavour was just more impactful.

12 boneless wings are £10.50, which in my option is a bit steep. Especially when compared to the low total price we paid to eat at Wingstop during the 50% off scheme. Large fries are affordably priced at £2.80.

💬 Let me know, have you been to Wingstop before? What do you prefer to order from there? Or can you recommend a chicken restaurant I could visit in London or Seoul/Incheon, S.Korea?